There isn’t any rule that specifies the sorting of cards when packaged by card companies. A single series of card decks will remain sorted the same way within a single release, but each new brand or version of a deck may alter its order without limitation.

It is up to the card designers as to what that order is for each new deck they release. These days some decks even come ordered in magic memorised “stacks” to enable miracles to occur right out of a brand new box.

Arranging the Cards in the A-K then K-A order places two kings in the centre of the deck in positions 26 & 27. These are commonly known as “Kissing Kings”. If fact, when you split the whole deck arrangement in the middle (between the kings) you get a mirror of each card on the opposite side. The Ace of Spades is opposite the Ace of Hearts and so forth.

If you perfectly shuffle a deck of cards (splitting the deck into equal 26 card  halves and accurately interlacing every single card one after the other) 8 times in a row, the deck will return to its original order. If you imperfectly (randomly) shuffle a deck of cards, they can be arranged in one of more combinations than there are atoms on earth.

It is documented that the fastest way to return a deck into order is to deal out the cards into four piles (one pile for each suit) and then arrange each pile before reassembling the deck. The internet is littered with record claims and videos of people demonstrating their fastest deck resorting efforts. You will no doubt find them amongst those solving Rubik’s cubes and stacking cups.

So cursed I am with continually sorting decks back into order (most likely for false shuffling) I have been crafting methods to make the process more interesting for years!

Below is one of my first attempts at making the card sorting process more entertaining. It is a video I created that turns sorting a deck of cards into a game. The idea is to use the method defined by the name “SOLVE” (flipped 37JDS) and try to complete it in the fastest time possible without dropping cards.

The main purpose of this article is to teach you my way to quickly sort a deck of cards without needing a table.

The main movement for my way of sorting the cards is spreading them from one hand to the other while arranging them into simple, easy to manage categories. Reordering cards in your hands is much more versatile for anywhere you might need to prepare or perform.

This method will not only get you quicker at sorting your decks, it will strengthen your hands for other sleights as well.

Start by cutting to the Ace of Spaces (face up). This isn’t vital, but just makes things better no matter how the cards are shuffled.

In this first step you are going to align them according to their colour and suit as they move across.

Black cards are pulled to the front and their positions are:

Red cards are pull behind and their positions are:

Once you have sorted the cards into their colour and suit positions, align them so that both the sides are neat but the bottom half and top half remain separate.

By rotating the top half you can strip out that half of the deck and separate it from the bottom half. The half you stripped out contains the clubs and the hearts. They are grouped together but not yet in order.

Place the half  that was stripped out from the top of the deck, behind the other half and straighten everything up.

One by one spread through the cards again but this time paying attention to the values.

There is no trick this. I simply look at each card one at a time and determine if it is in order. If not, I move it into position.

For example I’m holding a 3, I’m sliding across an 8, is that in order? Yes – it can slide into place. Even though there are cards missing still, one is greater than the other in the correct order.

Alternatively if I’m holding a Jack and I spread across a 9, I will have to shift the 9 into its correct position. At this stage it may be between a Jack and a 6, so long as it is in order, the other cards will be along shortly.

In my experience it is easier to concentrate on just moving one card at a time rather than shifting blocks of cards around as this can be harder to keep track of. Although this process seems quite manual, the one by one sorting actually becomes a lot faster once you get into a rhythm. 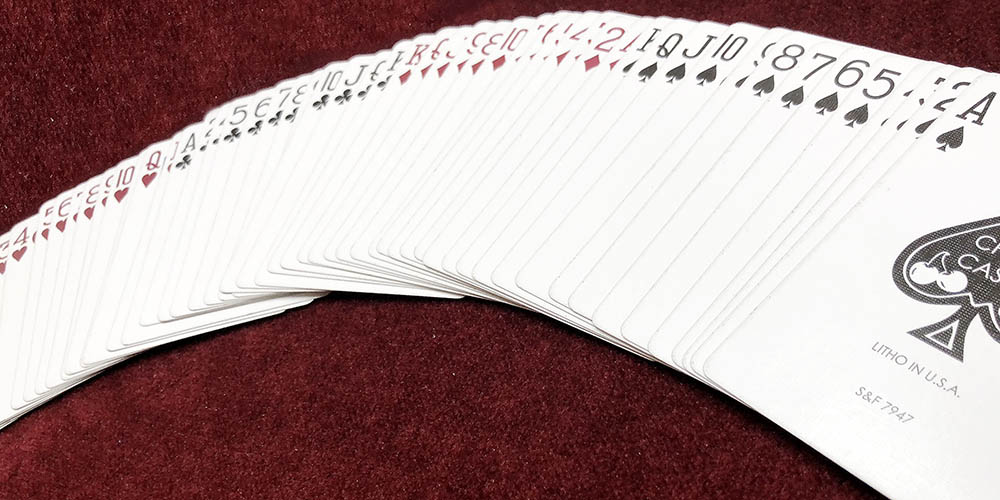 From Sorting to Practice

Another method I use to sort a deck of cards is slower but more focused on practising some sleight of hand. There is an advanced card move known as a spread cull that is a very effective way to secretly locate and control cards. Sometimes instead of using my standard method above, I will use a spread cull to collect and move each card into a simple “Ace to King” order.

If you are familiar with the Spread Cull move and would like to try what I do, here is the order I run with to get my preferred Spades, Hearts, Clubs, Diamonds, Ace to King order:

After completing the above steps, the deck will be in order and you will have practised spread culling 15 times!