As things get busier out IRL, things do get quieter here on my website. This is not reflective of my card work and magic practice. My days have been filled with learning new tricks, new sleights and, most importantly, working on some great new ideas. 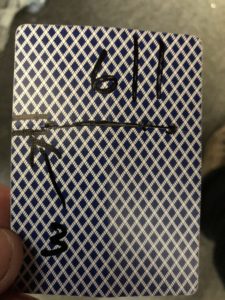 Over the the last few weeks, I have created and updated multiple new routines to add to my live set and to potentially sell. Whenever I get a wave of creative inspiration like this, I know not to waste it.

I have created so much in the last few months, it has been hard to find the time to note it all down. Some of my new tricks include a fun new torn card reveal, an ACAAN effect and an impossible card penetration illusion called “Beeline” that (even though I know how it works) still sometimes fools me!

I am cautious not to go into too much detail before releasing my creations so I can protect and properly copyright the ideas. For now, the goal is simply to test and fine tune everything as much as possible.

The time has come to produce demos and instructional videos for the stronger of my multiple new tricks.

This is always great fun, but very time consuming. I have tested my new 4k equipment regularly filming songs with my band Walker St and I now have a powerful new laptop capable of editing the UHD footage to professional standards.

My new illusion trick “Beeline” will be produced and released first as it is a routine that requires very little spectator interaction to demonstrate. The other routines are much more interactive so I will need to wrangle friends and family to be involved to film them effectively.

SO HERE’S THE PLAN

The time has come for me to structure a solid 30-45 minute routine that I can perform regularly and reliably to build up the match practice I need to move forward in this craft.

In the coming months, I plan to visit as many people as I can (as many as will have me!) to practice my brand new (and first ever!) live card magic / gambling demonstration show. I look forward to finally demonstrating what I have been working on and hearing everyone’s feedback. 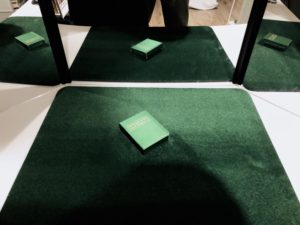 During the performances I will take the opportunity to video some demos of my original work and catch people’s reactions. The videos will have much more effect when filmed in front of spectators and will better demonstrate the routines to those who may wish to purchase and perform the tricks themselves.

HERE’S ONE I PREPARED EARLIER

Meanwhile, as you wait for my new videos you can check out all of my previous video releases on Penguin Magic.

On July 25 this year I had the honour of seeing one of my magic ideas (Rubber Band Through Card) published on one of the world’s largest magic retail websites. This would have been a fantastic moment for me had I been the one to release it.

Obviously curious, I purchased the familiar looking, but differently named, trick only to find it frighteningly similar to something I released three years prior in 2015. It mirrored my trick in:

The video was subtitled, but the translation used many of the same words and phrases in its advertising, and even followed very similar steps in teaching the method.

It is easy to think that I was directly copied, but as a songwriter I am very aware of how one person’s creative process can overlap another’s. My concern was not that my effect was stolen, it is that, no matter how independently conceived, it is just too similar.

For an almost identical trick to be released on a web marketing juggernaut like this, runs a huge risk of overshadowing my work in all series of online forums and markets. Essentially, my original trick could become known as the “other” version or referred to as “just like” this more robustly advertised clone.

I reached out to the magic company in private. I asked for them to discuss the issue with me so that we could clarify if the trick was indeed too similar.

After a few requests I managed to get in touch with one of there core members who was kind enough to review my work and compare the similarities.

Side note: When they asked for a copy of my method for RBTC, I very nearly replied saying “You have a copy! You’re selling a copy of it!” but I took the high road and sent them a copy of the video.

According to them, the 3 levels that classify an effect’s originality are:

When comparing our two versions of the same trick, it was deemed that the tricks “have the same foundations” but a different plot and alternate handling.

I accepted that mathematically it could be proven that the two tricks were different enough to both be sold separately. Unfortunately there is just no way to accurately measure the “feel” of the effect which I believe to be almost identical.

“In all honesty the hole actually adds something more …  as you’re proving the magic by having it stop in a hole halfway.”

The email from the core member of this magic company continued saying:

“Some could consider yours superior as it has the hole plot/handling to it.“

Regardless of the circumstances, it was great to have my work reviewed by a company that I have been a member of for many years, and hold a great deal of respect for.

The original and the best!

I will let you be the judge as to which effect is more deserving of your US$4. I have learned a little more about the industry through this experience and I want to make it clear that I don’t hold any grudges.

However, I will be very hesitant to release material publicly that I am unable to clearly claim later as my own creation. There is simply too great a risk these days of even a demonstration being reverse engineered.

I look forward to sharing some of my new material with you all very soon! 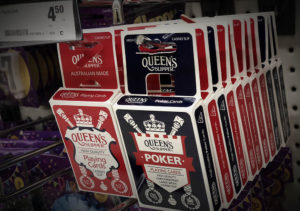 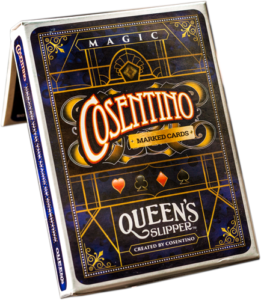 “I am not a collector!” … This is what I have to tell myself whenever I browse my usual vendors for playing cards. USPCC standards, ex-casino, cardistry patterns, boutique designs, original artwork, brand names, celebrities, speciality finishes, magic reveals, private reserves, red, blue, black … the list goes on! There are just so many variations out there! Too many!

I used to have a substantial collection of rare, out-of-print, limited release decks that decorated the inside of my cupboards and drawers. It was an investment? No … for me, it was a waste of time, money and space. Especially here in Australia where the shipping cost for decent cards is often higher than the cards themselves! I am not against card collecting by any means – I really enjoyed it. I still think it is worth holding on to one or two valuable gems as trophies. I’ve just recognised that my personal goal of collecting everything ever made by everyone was a tad futile.

Unfortunately here down under, I don’t have the luxury of walking into any shop and purchasing some everyday USPCC “Bicycle” or “Bee” decks so readily available in the northern hemisphere. For me the standard retail cost is well and truly above the currency conversion rate. They are often cheaper online but then we are slugged with  that dreaded shipping cost! 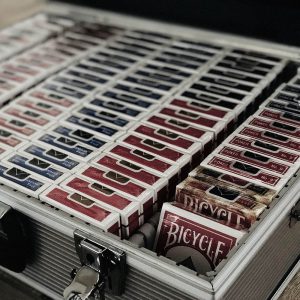 For a steady supply I have found that Cosco (still fairly new and limited in Australia) supply the best value bulk playing cards for general use. Their AU$30 brick of USPCC “Standard” Rider Back cards are more than good enough for magic or gambling demonstrations and are sturdy enough to last a while. $3 per deck is a lot better than the alternatives (so long as you have a $60 annual membership or know someone who does).

Outside of that I have discovered a few online stores offer free shipping when you purchase over a certain amount in one transaction. This is usually expensive, but it is a great way to buy speciality bricks (boxes of 12 decks) in bulk.

Over all, my recommendation is to simply have a decent stockpile on hand of great cards you intend to use. I would rather invest my money and time into my skills – only purchasing items that I intend on opening and using.